iPhones of Mass Destruction and the Code War

According to Apple, jailbreaking your iPhone violates Apple’s license agreement, constitutes copyright infringement — and — is a threat to national security. Meet the new weapon of mass destruction: the hacked iPhone. Just like Saddam Hussein’s WMDs, the iPhone of Mass Destruction is more red herring than reality. In a nation obsessed with security, particularly cybersecurity, the attempt by Apple (and AT&T) to frame a hacked iPhone as a security threat raises important questions of social reproduction, particularly among youth. 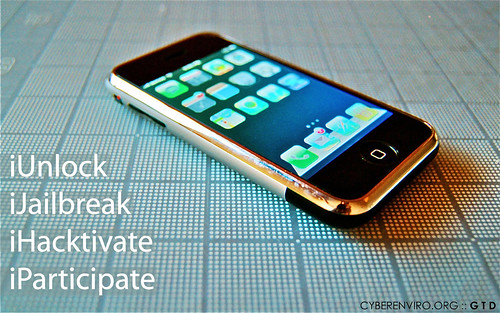 Apple made this argument to the U.S. Copyright Office in response to a request from the Electronic Frontier Foundation that the U.S. Librarian of Congress grant an exemption to the Digital Millennium Copyright Act that would clearly define jailbreaking as legal (under certain conditions). Back in 2006 the Librarian of Congress granted six 3-year exemptions to the DMCA, the fifth of which stated:

This expiring exemption was widely understood to legalize the act of jailbreaking for otherwise legal, personal, and non-profit purposes. However, now that the EFF is seeking a similar exemption, Apple is going further than previous arguments (i.e. jailbreaking violates your license agreement) and is now arguing that jailbreaking results in copyright infringement and could compromise national security. This continues the meme, advanced by corporations and governments alike, that “loose code” is a threat to security in the informational age – thus, equating piracy and hacking with insecurity in order to rationalize monopolistic business practices. The very same business practices that Tim Berners-Lee, inventor of the World Wide Web, warned would lead to “vertical integration” between the medium and content. As Wired’s Threat Level points out:

This also explains why Apple rejected the official Google Voice App for the iPhone this week. We thought it was because Google Voice posed a threat to AT&T’s exclusivity deal with Apple. Now we know it threatened national security. At stake for Apple is the closed business model it has enjoyed since 2007, when the iPhone debuted. More than 30 million phones have been sold. Apple has told the Copyright Office that its locked-down platform is what made the iPhone’s success possible

Here are 3 key excerpts from Apple’s statement to the U.S. Copyright Office:

And 2 key excerpts from EFF’s statement to the U.S. Copyright Office:

In our article, Cookie Monsters: Seeing Young People’s Hacking as Creative Practice, Cindi Katz and I spoke at length about jailbreaking (and hacking more broadly) as a form of play — as a creative practice that helps young people to better understand and control their technological environments. To help make our case, we profiled AriX — the then 13-year-old iPhone hacker and developer of the ijailbreak application:

In an article entitled “Hacking: The New Child’s Play?” posted on an IT security website, AriX is associated with a list of young crackers who have engaged in malicious and clearly criminal activities. With the subtitle “Researchers worry as teens and pre-teens play an increasing role in illegal online exploits,” the piece makes no distinction between the hacking of AriX and the reported computer crimes of the other youth profiled, even though the latter’s activities included derailing trains in the Polish city Lodz and stealing considerable sums of money from people’s bank accounts (Wilson 2008). The distinction between these activities and hacking like AriX’s is clear.  But even at that, the U.S. Librarian of Congress granted six exemptions to the DMCA in 2006…

If Apple gets its way, young hackers like AriX would be considered criminals — and any attempt to rework the copy of a software program that they legally own would be considered illegal at best and a threat to national security as worst. Creating a generation of people who are forced by law to simply take technology “at interface value” (as Sherry Turkle likes to say) is a recipe for disaster. I wonder how many mechanics or engineers our society would  have produced during the industrial age if a generation of young people were told it was illegal to tinker with a car or bike that they legally owned? Would Bill Gates or Steve Jobs have even existed (at least as we know them) if they weren’t allowed to tinker with the various technologies they interacted with during their youth? Copyright laws were created to ensure creativity – not to ensure the power of certain governments or corporations.