This Saturday (10/13/12) I’ll be presenting with Kiersten Greene at Northwestern University’s InfoSocial Conference. Info and abstract below:

Abstract: The ubiquity of proprietary technologies embedded within informational modes of pedagogy and research unsettles industrial understandings of privacy and property within educational environments. As educational institutions commit a growing portion of shrinking budgets to proprietary software and outsourced ICT services, their informational infrastructure intertwines with corporations from Google and Blackboard to IBM and Apple. We offer a multi-disciplinary analysis of this proprietary infrastructure, drawing on our respective dissertation research in the fields of Urban Education and Environmental Psychology, to articulate issues of privacy and property experienced by young people and teachers in these educational environments. We begin by summarizing the findings from two independent cases: The MyDigitalFootprint.ORG Project and The NYC Teacher Blog Project. Our first case, MyDigitalFootprint.ORG, is a participatory action design research (PADR) project interested in the concerns of young people developing in proprietary information ecologies. This project began by interviewing young people ages 14-19 in New York City to identify shared online privacy, property, and security concerns. A collective of youth co-researchers was then assembled to further research and take action in response to these concerns through the development of a youth-based open source social network. Through this PADR project, young people participated in investigating and reconfiguring how information is experienced in their everyday environment. Our second case, The NYC Teacher Blog Project, aggregates, stores, and anonymizes the blog posting of New York City teachers for qualitative analysis in order to examine the tension between the realities of everyday pedagogical practices and the tacit privatization of educational policy. Whether at the federal, state, or local levels, teachers’ opinions, local knowledge, and expertise count for naught in the policymaking process as K-12 public school teachers are provided little if any voice in the construction of education policy. The traditional isolation of the teaching environment has provided teachers with little opportunity to connect, reflect, or engage with this process. Yet, as our everyday information infrastructure grows so to do opportunities for teacher expression and research. Blogs have proven an enduring aspect of this infrastructure by providing a space where teachers can reflect, connect, and share local knowledge. We conclude our review of these two cases by discussing strategies for reworking educational boundaries, relationships, and flows towards the privacy, property, and participation concerns of young people and teachers. With the MyDigitalFootprint.ORG Project, we look specifically at the open source software and PADR methods employed to engage young people as producers of social media and participants in social research, rather than as social media consumers and social research subjects. With the NYC Teacher Blog Project, we look specifically at how its partnership with the OpenCUNY Academic Medium, a student-based open source medium at the CUNY Graduate Center, afforded both methodological and epistemological breakthroughs around teacher privacy and property in educational environments.

information assimilation and the life of the child

From Dewey’s The School and Society, p100:

It was forgotten that the maximum appeal, and the full meaning in the life of the child, could be secured only when the studies were presented, not as bare external studies, but from the standpoint of the relation they bear to the life of society. It was forgotten that to become integral parts of the child’s conduct and character they must be assimilated, not as mere items of information, but as organic parts of his present needs and aims – which in turn are social.

While reading Walter Lippmann’s “A Preface to Politics” my attention was mainly drawn to his discussion of the red herring. The red herring — a metaphor used to describe the obfuscation of, or distraction from, a particular object(ive) — is portrayed by Lippmann (1913, p261) as both “pest” and “benefit,” as a political maneuver which can be employed as “a matter of misrepresentation and spite” or as an “honest attempt to enlarge the scope of politics.” Having just given a presentation at the University of Surrey, which discussed the role of young people as both red herring and cultural innovators in current ‘debates’ over cyberspatial regulation, I took my unexpected discovery of Lippmann’s red herring analysis as sign of synchronicity.

Mitt Romney — former Governor of Massachusetts and current frontrunner for the Republican presidential nomination — has been noted for his upbeat, gee-whiz campaign style, channeling 1950s nostalgia and a return to the “good ol’ days.” A recent campaign ad titled “Ocean” (which caught my eye on c-span the other day) puts “the children” front and center. With imagery of children playing in the ocean, Mitt’s voice informs the public of his desire “to clean up the waters in which our children have been swimming.” Way to go Mitt!!! As a former Bostonian I’ve waited a long time for you to come around on environmental issues, so how do we clean up all the pollutants which permeate the waters in which our children have been swimming? What’s that Mitt – with censorship…?

Ah yes, pornography. Of course Mitt doesn’t want to actually “clean up” the waters in which our children swim, he just wants to “clean up” the media – to hell with the real water! Quoting a Peggy Noonan article (article here) written after the Columbine shootings, Mitt warns about the media “cesspool” in which our children are swimming and and states his intent “to keep pornography from coming up on their computers.” Hardly an instant of “enlarging the scope of politics” this use of young people as red herring serves as a distraction from the issues of media censorship and government surveillance and instead misrepresents them as a simple matter of protecting our children. Additionally, this discourse portrays young people as helpless victims who need to be saved — demoralizing their sense of agency — in order to rationalize an erosion of the public’s civil liberties. While Mitt’s commercial is just one example from a single presidential candidate, this discourse has been frequently employed by both media (such as NBC’s To Catch A Predator or Time Magazine’s “Cyberporn” issue) and the state to command the public’s attention. Look no further than the U.S. Attorney General and FBI Director’s recent argument that Google must turn over all emails, internet traffic records and internet search data to the government in order to battle the national threat of child pornography.Laying the civil liberties argument aside (for the moment), this “save the children!” harangue is having a chilling affect on childhood, particularly within youth spaces such as the home and the school. As Cindi Katz (2007) has argued, a sense of ontological insecurity is being socially reproduced in both parenting practices and childhood, transforming the home into a reflection of the state and thus normalizing the process of surveillance during childhood. Torin Monahan (2006) adds, that such practices — particularly within schools — portray young people as either “victims or criminals” who must be “protected or controlled. 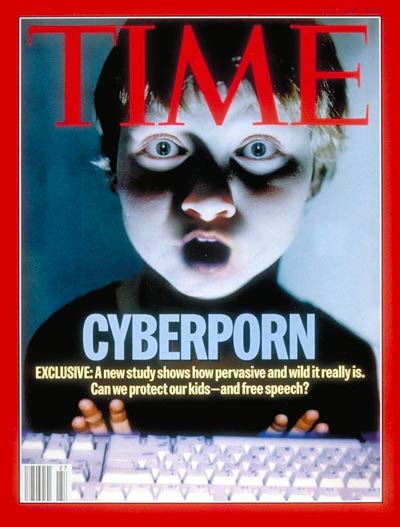 But such a duality presents a false choice since neither option portrays the young person as a “citizen” who could actually be “engaged.” Either through processes of protection or control, agency is removed from the young person and feeds a citizenry that is either dependent on the state to filter its information, or one that is subjected to consistent “risk management” by the state. Under both conditions, a sense of ontological fear and insecurity is promoted, surveillance is normalized, and political disengagement becomes standardized. What was that about cleaning up the water Mitt???

Rather than using young people as a political ploy to prevent a real debate over the role of commerce and the state in surveillance and censorship, perhaps we should be engaging young people in the debate. After all, if they are the ones swimming in this “water” wouldn’t their input provide some much needed first-hand experience? Its seems to me that engaging young people as participants (not as victims or as criminals) in this “debate” would only serve to enlarge its scope and legitimate its outcome. What say you Mitt?