Occupy the Sky: Balloon-Camera and NYPD Helicopter Watch the May Day Rally in Union Sq 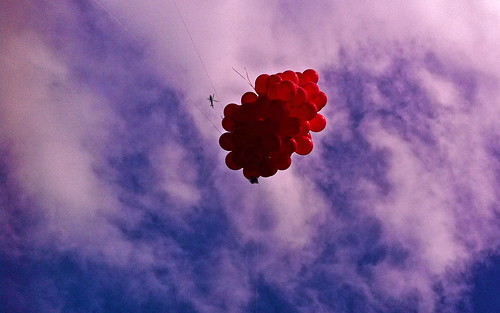 I’ve finally gotten around to posting some footage from the Critical Mass at Union Square on 07.27.07. Below the fold you’ll find two videos and a slide show of pictures. The first video documents the organization of Critical Mass in Union Square North from 6:45 PM (15 minutes prior to their 7:00 PM scheduled meeting time) until 7:45. The second video documents an officer confronting a biker and the crowd’s reaction.

Video One: This footage documents the organization of Critical Mass in Union Square North from 6:45 PM (15 minutes prior to their 7:00 PM scheduled meeting time) until 7:45. This Critical Mass was organized by Times Up! with an appearance by the Reverend Billy. The hour-long footage has been sped-up so that the crowd’s movement over time within this space could be better realized for analytical purposes.

Video Two: An officer confronts a biker for failing to respond when spoken to (occurs in the left side of screen with downward movement). The crowd reacts by refocusing on the interaction and within minutes are surrounding the police and the biker. This video footage was originally 3 minutes in length. However, time has been manipulated – slowing the footage of the officer confronting the biker and speeding up the footage of the crowd reorganizing – to draw attention to the shifts in movement which occur in this space.

Photos from throughout the night: